Article in The Police Chief magazine

Editor's note: Mr. Murtagh was the prosecuting attorney in the 1979 MacDonald murder trial.  Mr. Malone has been a central figure in the hair and fiber analysis required throughout the post-trial appeals process.

The trial of the United States v. Jeffrey R. MacDonald commenced on the morning of July 19, 1979, in the U.S. District Court for the Eastern District of North Carolina, in Raleigh, and was to continue until his conviction on August 29, 1979.  The prosecutor's theory was that MacDonald's exculpatory account of the murder of his wife and two small daughters by intruders was false and was thereafter evidence of his consciousness of guilt.  In particular, the prosecution focused on MacDonald's own account of his movements in the crime scene after the "intruders" had allegedly fled into the night.  Here, the purpose was to demonstrate that MacDonald's alibi that he was in the living room when his family was being attacked in the bedroom was false.
Ultimately, it was proven beyond a reasonable doubt that the crime scene had been rearranged and that only MacDonald could have rearranged it.  In effect, the jury was asked to determine whether to give credence to MacDonald's account or to the story told by the physical evidence.
MacDonald's defense involved several themes:
1.  the intruders did it;
2.  the crime scene integrity was destroyed by the military police;
3.  physical evidence that cannot be linked to the household or its occupants proves the presence of intruders;
4.  unlike the government experts, the defense experts have correctly examined the physical evidence and
5.  there is no evidence to prove that MacDonald was other than a loving husband and "a wonderful Daddy."
Fortunately for the prosecution, MacDonald's account was well documented and consisted principally of a tape recorded interview on April 6, 1970, and his subsequent testimony before the Army's Article 32 investigation officer and the federal grand jury.
The case focused on Jeffrey MacDonald's torn and bloody blue pajama top, found on top of Colette MacDonald's body, which was lying in a supine position on the shag rug of the master bedroom.  When Colette's body was lifted off the rug, a CID agent spotted a dark thread in a blood clot on the rug in the area where her head had been.  The agent's hunch that the thread might have have come from the blue pajama top (later confirmed by laboratory examination) prompted an immediate search for threads in the body outline, as well as in the living room where MacDonald said he had been attacked and his pajama top torn.
The results of this search were informative: a total of 60 threads and yarns were found in the master bedroom.  Thirty-four were found under Colette's body, and one was found on the floor beneath the headboard that bore the word "PIG" written in Colette's blood type.  Nineteen were found inside bedding in which Kimberley's body was wrapped, and three were found on Kristen's bedspread.  Significantly, neither threads nor fibers from MacDonald's pajama top were found in the area of the living room where he claimed to have been attacked.
What was found in the living room was a bloodstained Esquire magazine containing an account of the recent Tate-LaBianca murders perpetrated by Charles Manson's hippie family.  In addition, MacDonald's eyeglasses, which he claimed not to have been wearing during or subsequent to the "struggle," were found in the living room with Kristen's blood blood group on the side of the lens that was in contact with the floor. 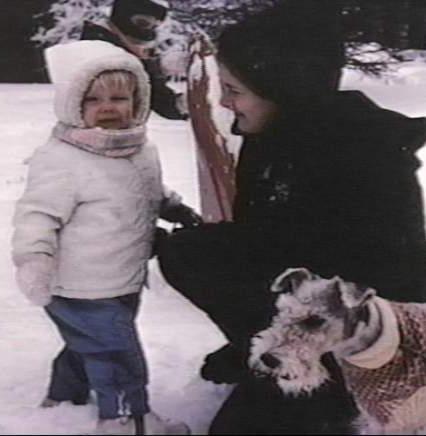 Webmaster note:  Contrary to Jeffrey MacDonald's assertion that the unidentified dark woolen fibers found at the scene could not have belonged to anyone in his family – and must have come from the the dark clothes of the "hippie intruders" – this family photograph shows Colette (with baby Kristen) in a dark coat and knit hat.

Webmaster note:  Although Jeffrey MacDonald contended that the 48 ice pick holes in his pajama were the result of a violent struggle with an ice pick-wielding assailant, he sustained no such wounds himself.  In fact, when the pajama was folded right sleeve inside out, as it had been found on Colette's chest, it was possible to insert 21 probes simultaneously through the 48 ice pick holes in the pajama top.  The resulting pattern (above, left) corresponds exactly with the two groupings of the 21 ice pick wounds in Colette's chest (above, right).


The pocket from MacDonald's blue pajama top was found on the upturned corner of a multicolored throw rug adjacent to Colette's feet.  When CID agents questioned MacDonald about the disparity between the lightly bloodstained pocket and the blood-soaked top from which it had been torn, MacDonald provided the following explanation: Upon regaining consciousness in the living room, and still wearing his pajama top (which had been torn in the struggle with an ice pick-welding assailant), he had gone directly to the master bedroom and shed his pajama top.  He then described how he had covered his wife with his pajama top and a "towel" to treat her for shock.  Attempting to explain how the pajama pocket could have been torn in the living room, but fallen off in the master bedroom, MacDonald was emphatic that he had not made a "circuit" of the other rooms before removing his pajama top.
This statement kept MacDonald from explaining away the results of subsequent laboratory examinations, which revealed the following: some of the blood stains in Colette's blood type on MacDonald's pajama top were bisected by tears on the front of the pullover-type pajama top.  This indicated that Colette's blood, which by MacDonald's account could only have gotten on the pajama top when he placed it on her body, was there before it was torn.  The location where the pajama top was torn, according to MacDonald, was the living room.  However, this was controverted by the profusion of pajama top threads in the master bedroom.  Furthermore, the pocket was stained with Colette's blood type as the result of direct contact before it was ripped from the pajama top.
The compelling blood evidence further demonstrated that MacDonald's assault on his wife and older child, Kimberley, had originated in the master bedroom.  Due to the fact that each of the four members of the MacDonald family had a different ABO blood group, [1] and all had bleeding injuries, it was possible to reconstruct, to a degree, the locations where the assaults had taken place.  The presence of contact blood stains in both Kimberley's and Colette's blood types on the master bedroom rug, on splinters from the club (which was found outside the utility room door) and other blood spatters showed that both Kimberley and Colette had been assaulted in the master bedroom.
In Kimberley's room, spatters in Kimberley's and Colette's blood groups on the wall adjacent to the bed where her body was found indicate that Kimberley was assaulted with the club a second time, after it had been stained with Colette's blood.  MacDonald is linked to these assaults by the presence of a stain in Kimberley's blood type on his pajama top, which – according to his account – he was not wearing when he went into Kimberley's room.  In addition, threads from his pajama top were found on the club, which also bore fibers from the throw rug upon which the pocket and threads from MacDonald's pajama top had fallen.  As the club was stained with both Colette's and Kimberley's blood groups, the logical inference is that club came in contact with the throw rug and acquired the rug's fibers, as well as other foreign fibers (such as the pajama top threads) that were present on the rug. 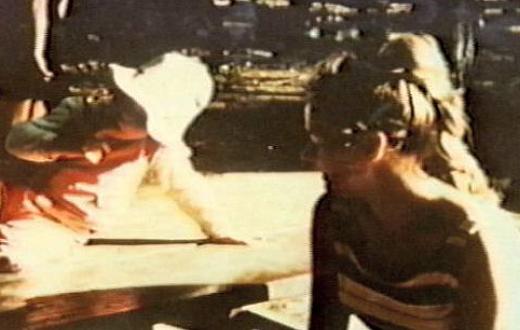 Webmaster note:  Another family photo shows Kristen and Colette, wearing the blond fall whose fibers were shown to match the unidentified "wig" fibers that supposedly linked Helena Stoeckley to the crime scene.

Webmaster note:  The defense scenario alleged that at some point during the crimes, Helena Stoeckley, wearing a blond wig, had answered the kitchen telephone in the MacDonald residence and left a clear-handled hairbrush on a sideboard near the phone. The 'wig' fibers found in this hairbrush were analyzed with the following results. The blond synthetic hair was found to be a saran fiber often used for doll hair; at far left is a blond saran doll hair from the FBI reference collection for purposes of comparison. The grey modacrylic wig fiber found in the hairbrush (far right) was found to match grey modacrylic fibers from the blond fall Colette was known to wear.

The Direct Appeal
In July 1980, the U.S. Court of Appeals for the Fourth Circuit reversed MacDonald's conviction on the grounds of denial of his right to a speedy trial, and cited as trial prejudice Helena Stoeckley's loss of memory of her whereabouts.  The government petitioned the U.S. Supreme Court for a writ of certiorari, which was granted.  On March 31, 1982, after briefing and oral argument on the merits, the Supreme Court found no denial of speedy trial rights, reversed the Fourth Circuit and reinstated MacDonald's conviction.  The case was remanded for disposition of remaining issues and MacDonald was returned to prison the same day.  A subsequent appeal on the conduct of the trial, including the exclusion of Stoeckley's out-of-court statements, was rejected by the Fourth Circuit and the Supreme Court.
While MacDonald's conviction had theoretically become final by 1981, several collateral attacks on the conviction were mounted.

The 1984 Collateral Attack
In 1984, MacDonald filed a motion for a new trial on the grounds of newly discovered evidence in the form of detailed post-trial confessions by Helena Stoeckley.  Also filed at this time were petitions for writ of habeas corpus, challenging the conviction on the grounds of alleged suppression of exculpatory physical evidence.  The "exculpatory" evidence had been obtained by the defense under the Freedom of Information Act, and included laboratory bench notes from both the FBI and the CID.  These claims were also rejected by the trial court, appellate court and Supreme Court.

The Outcome
On Monday, July 8, 1991, U.S. District Judge Franklin T. Dupree, Jr. who presided over MacDonald's original trial in 1979, denied Jeffrey MacDonald's petition for a new trial, stating: "The fiber evidence presented here for the first time would have been insufficient to alter the result at trial, and if a new trial were held, the jury would again reach the almost inescapable conclusion that Jeffrey MacDonald was responsible for these horrible crimes."
On July 2, 1992, the U.S. Court of Appeals for the Fourth Circuit again denied MacDonald's petition and upheld Judge Dupree's prior ruling.  Commenting on the "newly discovered" evidence in its lengthy opinion, the Appeals Court stated, "The most that can be said about the evidence is that it raises speculation concerning it origin.  Furthermore, the origin of the hair and fiber evidence has several likely explanations other than intruders."  The court goes on to state, "We have carefully reviewed the voluminous record of evidence in this case, beginning with the original military Article 32 proceedings through the present habeas petition, which contains over 4,000 pages.  Yet we do not find anything to convince us that the evidence introduced here, considered with that previously amassed, would have raised reasonable doubts in in the minds of the jurors."
In October 1992, the U.S. Supreme Court denied Jeffrey MacDonald's petition for a writ of certiorari to review the appellate court's decision.
At this writing, MacDonald is serving his sentence at the Federal Corrections Institution in Sheridan, Oregon.  He is currently eligible for parole.
________

3  Helena Stoeckley was a known drug addict and member of a hippie community who emerged shortly after the news of the MacDonald murders became known locally.

4  MacDonald stated that when he initially awoke in the living room, he saw a blond girl wearing a floppy hat and boots carrying a candle and chanting "acid is groovy, kill the pigs."

8  Gaudette, "Probabilities and Human Pubic Hair Comparisons," Journal of Forensic Sciences, pp. 514-517, July 1975.
Webmaster note:
The misspelling of Kimberly was corrected to Kimberley in this transcript.